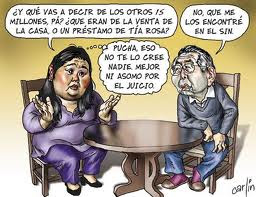 The Fujimoris: Like father like daughter? By Jo-Marie Burt and Coletta Youngers
It's ingenuous to think another Fujimori government would avoid the massive corruption and human rights violations of the Fujimori rule in the '90s, write these two researchers on Latin America.
Originally published in Foreign Policy in Focus
Two polls released this week show Ollanta Humala with a small lead over Keiko Fujimori as the campaign heats up for the second round of voting in Peru’s presidential elections. With more than a month to go before the June 5 vote, it is far too soon to predict the electoral outcome. But one thing is clear: The rest of the campaign will get ugly, as right-wing sectors are very nervous about the impact of a potential Humala victory on their bank accounts.
Most of the mainstream media – with the notable exceptions of the Lima daily, La República, and the weekly magazine, Caretas – is throwing its weight, and electoral coverage, behind Fujimori. Already, several promi…
Read more
More posts