U.S. ACTION ALERT IN SOLIDARITY WITH THE PEOPLE OF PERU 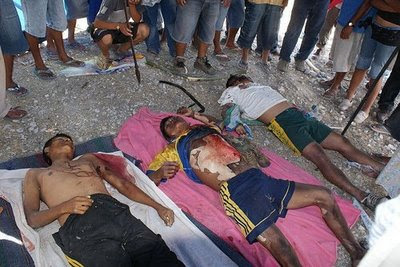 U.S. ACTION ALERT IN SOLIDARITY WITH THE PEOPLE OF PERU - stop violence and unnecessary deaths now!

Honoring our fallen brothers and sisters victims of the Bagua massacre of June 5 and 6, 2009.


Our condolences go to the people of Peru, to the relatives, friends and communities of the Indigenous activists and the Police members who were killed in a tragic event that should have never occurred.

"Amazon Indigenous peoples are not first class citizens in Peru"Peru's president Alan Garcia, justifying his attacks on civilians using snipers and bombs, which has caused between 35 to 85 deaths and hundred of injured people.